The countdown to the most anticipated wedding of the year is underway. Prince Harry and American actress Meghan Markle are just hours from tying the knot at St. George Chapel on Saturday, May 19, in what is guaranteed to be a lavish ceremony with a refreshingly modern spin. No matter how Americanized the royal wedding may be, there are still some time-honored customs that will likely be by the book, if only at the behest of the Queen. Luckily, you don’t have to be royalty to incorporate them into your own fairytale nuptials. Consider these British royal wedding traditions your “something borrowed.”

Tiaras are an emblem of the British royal family, and Queen Elizabeth II has on   e of the most impressive collections in the world. Typically, it’s under lock and key, but royal weddings offer us a rare glimpse of the crown jewels. Remember when Kate Middleton married Prince William in April 2011 wearing the Cartier Halo tiara, on loan from Her Majesty the Queen? It featured a whopping 1,311 diamonds! Rumors are circulating that Markle may don the Strathmore Rose tiara, the Lover’s Knot tiara, or Princess Diana’s Spencer tiara, which she wore during her 1981 wedding to Prince Charles.

If you’re going to invest in a bridal tiara for your own wedding, plan well in advance. The key is finding one that complements your dress and doesn’t compete with it. You’ll also want to consider the venue, the theme of the wedding, your face shape, bridal hairstyle, and even your height. (Yes, there’s a lot that goes into one little tiara!) Often, bridal shops or expo vendors will have a selection on-hand for you to try. If you’re worried about wearing the tiara again, there are variations that collapse and turn into brooches. In short, there’s something for everyone!

In the States, “black tie” usually implies a tuxedo for men no matter what time the wedding festivities begin. But across the pond, men often wear morning suits for daytime formalwear. Expect to see many of the notable male attendees at the royal wedding in a cutaway tailcoat, a waistcoat (vest), trousers, and a 4-in-hand tie. Gloves, canes, and top hats are optional, of course.

A morning suit is a great alternative for formals when the groom and groomsmen are planning on renting. Because, let’s face it, a wedding is one of the few times a man can really get away with this.

A fanciful fruitcake always takes center stage at British royal weddings. In fact, they’ve been a staple since the medieval period. Prince William and Kate opted for two cakes when they said “I do.” The pièce de résistance was an eight-tier fruitcake created by Fiona Cairns that was made with cherries, raisins, orange marmalade, currants, and brandy. A second dessert came in the form of a simple chocolate biscuit cake that was said to be a favorite of both Queen Elizabeth II and William. 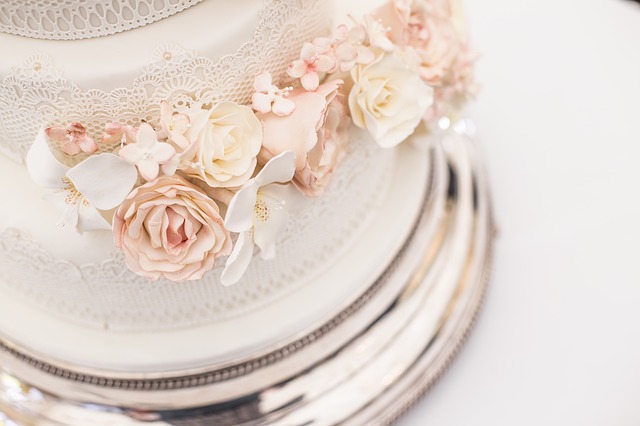 Earlier this year, Kensington Palace released a statement that Prince Harry and Meghan were bucking tradition in favor of a more “Americanized” cake made with organic Amalfi lemons and English elderberry. This delicious confection was commissioned by Claire Ptak, of hip East London shop Violet Bakery, who will top it with buttercream icing and decorate it with fresh flowers. That being said, it’s still an English wedding. We’ll be shocked if there’s not a fruitcake of some sort hiding in the corner.

For your special day, we have two words for you: groom’s cake. And that takes care of that.

British wedding etiquette dictates that women who attend the ceremony should wear hats or fascinators. The cardinal rule? Bigger is better. Back in the day, Princess Beatrice and Princess Eugenie made waves for their over-the-top headwear at Prince William’s nuptials, and we’ll likely see more where that came from on Prince Harry and Meghan Markle’s big day.

If you’re planning a formal wedding, a garden soiree, or even a themed event, you may want to consider adding headwear to the dress code specifications. However, if you’re getting married in a church, be sure to check their guidelines before mailing out the invites.

A Sprig of Myrtle

According to Kensington Palace, royal wedding florist Philippa Craddock will be using locally-sourced foliage from native trees for the decor, along with seasonal plants, like white garden roses, peonies, and foxglove. No doubt a sprig of myrtle will also be on the docket. This tradition dates back to Queen Victoria, who received myrtle from Prince Albert’s grandmother and planted it on the grounds of the Osbourne House on the Isle of Wright. This same myrtle plant has provided clippings for the bouquets of royal brides, including Queen Victoria’s daughter, Princess Victoria, Queen Elizabeth, Princess Diana, and Kate Middleton. Myrtle symbolizes love, luck, and prosperity.

Since royal decorum isn’t a factor you’ll need to consider, you can sprinkle in myrtle wherever you please. Perhaps you’ll want to use it in the groom’s boutonniere or your mother-in-law’s corsage. It’s also a sophisticated filler for garlands and tabletop centerpieces. The options are endless.